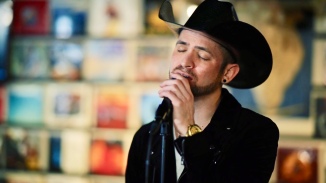 Today marks the first time Selena Quintanilla Pérez has been more famous in death than when she was alive. The Queen of Tejano was a few weeks shy of 24 years old when she passed on March 31, 1995. Since then her legacy has inspired the biopic of the same name which launched the career of Jennifer López.

EMI Latin, the record company that was founded after Jose Behar discovered Selena at the Tejano Music Awards came to develop the careers of Daddy Yankee, J Balvi, Thalia, and a host of other talented artists.

Today her legacy is stronger than ever. In honor the the brilliant person that she was, Son de Rey has payed tribute with their live, acoustic version of “No Me Queda Más” which was filmed and produced by Eric Vera at Short Hair Company in Austin, Texas.

Son de Rey will also be hosting their annual Selena Tribute Show at Sahara Lounge on April 13. This concert was recently featured at one of the top five Selena Birthday events to attend in Austin by Austin360.

Watch the stunning tribute to the late Tejano Music star below.

Join us April 13 at Sahara Lounge in Austin, Texas. Tickets are $10 at the door. Cover includes free parking and African buffet.

Nicky Jam, has gone Norteño! Sort of… We’re celebrating the re-release of our single  “El Amante” a cover of the Nicky Jam hit single with a Tejano Twist.

The song was arranged by David Moreno in collaboration with Grammy Winner Fabian Hernandez, Armando Aussenac, and Raphael Flores.

The video was filmed by Austin Kilcullen  and produced by lead vocalist of the Son de Rey, Luis Miguel Ramírez.

Son de Rey takes the stage at One-2-One Bar Thursday June 11 with Austin Latin Bands Huerta Culture, and Cuchillo-‘e-Palo. $10 to get in and see all 3 bands. RSVP on Facebook for show updates and more.

Huerta Culture plays dance music for parties. The band mixes cumbia, ska, reggae, hip-hop, blues, rock, and balkan influences to create a sound that has been dubbed ‘psichocumbia’. With 4 singers in the band sometimes all switching verses throughout a song and singing in English, Spanish, and Quechua (an indigenous language of Bolivia), Huerta Culture keeps arrangements dynamic and eclectic. The phat bass and rhythmic keys are accompanied by a wizard trumpet. Some songs also feature the guacharaca and the Andean pan pipes. In 2014 Huerta Culture released the full length album HOMEGROWN. Check it out at

Son de Rey’s Latin Alternative sound blends traditional Cumbia, and Latin beats with Pop-Electronica. They are a 5X Austin Music Award nominated Band. In 2015 the Austin Chronicle named Son de Rey Top 2 Latin Band in Austin, Texas. Their powerhouse performances have led them to collaborate with the best in the Latin Music including exclusive and Grammy Winning acts like A. B. Quintanilla and Los Kumbia All-Stars, Del Castillo, Ruben Ramos & The Mexican Revolution, Michael Salgado, and Dennis Quaid.  Purchase to their new album, “Ojos Azules”

Cuchillo e Palo specializes in fun, energetic music from Cuba, South America and beyond, playing Son, Salsa, Cumbia, Cha-cha-cha, Bolero, and more. The band includes several veteran members who you will recognize from various Austin bands you’ve known and loved over the years. 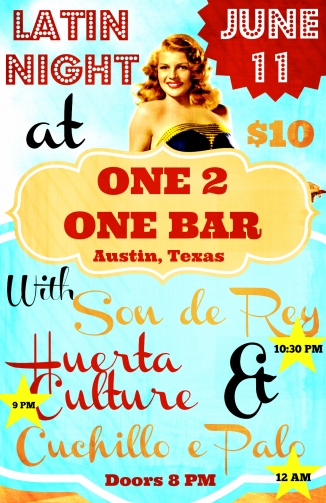 Damas y Caballeros… Pachanga Fest happens this Saturday May, 16 at Fiesta Gardens in Austin. Son de Rey is thrilled to open up the festival on the NPR alt.Latino/KUTX Stage at 2 PM. The concert will feature performances by Kinky, Ceci Bastida, Irene Diaz, Compass, Mala Rodriguez, Enjambre, and more.

Catch SDR Friday morning on FOX 7’s Good Day Austin at 9:55 AM. They’ll be performing a few songs off the latest album Ojos Azules. Click here to order a physical copy of the album on our website.

Saturday the group will put on a show for the books! Remember to catch them live at 2 PM. RSVP here to put it on your calendar. Merchandise will be available for purchase.

So remember to pack your favorite chanclas, and get ready for an amazing time!

Physical copies of the Ojos Azules Album are now available for pre-order!

Son de Rey will celebrate the release of their first full length album “Ojos Azules” with a concert at Spider House Ballroom. There will also be performances by Como Las Movies and ¡Oh Antonio + His Imaginary Friends! Don’t forget to RSVP here on Facebook to stay up to date on the latest news. Tickets can be purchased on TicketFly, or at the door for $10. Doors open at 8:30.

Son de Rey was also recently nominated by KUTX to battle it out for a showcase at this year’s Pachanga Latino Music Festival. Vote for Son de Rey by clicking ‘like’ on their photo. Feel free to share it, and tag your friends.

Physical copies of the Ojos Azules album are now available for pre-order.

Click here to pre-order your copy. Digital release will be available May 8, on iTunes, Amazon, Google Play and other online music stores.

After 3 years, we’re making our return to the Poteet Strawberry Festival this Sunday. Catch our show at 2 PM from the Bud Light stage.

Next week, join us at Güero’s Oak Garden Thursday April 16 as we’ll be celebrating “Selena Day” with a special tribute during our show.

Friday April 17, we’re heading out to San Antonio, Texas for a show with A.B. Quintanilla and the Kumbia All-Stars, and Ricky Valenz. That evening we’re back in Austin for Peligrosa Fridays at Empire Control room with Este Vato, & Happy Colors. RSVP Here.

Catch more of our show dates on our website.

The Ojos Azules album is produced by Grammy Winner Fabian Hernandez and includes special remixes from the Ojos Azules – EP along with all new tracks.

We’ll be featuring performances by Austin favorites Como Las Movies, and ¡Oh Antonio + His Imaginary Friends! Tickets will be $10 at the door. Merchandise will be available for purchase at the venue.

For more show dates in April visit our website here. Be sure to save the date and RSVP on Facebook for more details and updates.

We’d liked to thank the ATX Music Office​ for officially proclaiming February 12, 2015 as “Son de Rey Day” in the city of Austin, Texas. We are honored to receive this special recognition.

We were allowed to create a few “rules” for the day, so please join in the fun:

1. Drink a Bud Light (if you’re of age)
2. Dance a cumbia
3. Eat at your favorite Mexican Restaurant

We’ll debut a new single of ours “Este Agosto (Dimelo)” with a special performance at City Hall this afternoon. You can join us in person, or stream our performance at 5:30pm today online via http://www.atxn.tv, watch on Time Warner Cable and Grande Communications Channel 6, or AT&T U-Verse Channel 99

Thanks for all the love and support.

The show will be their first collaboration with Timberos Del Norte, known for their remarkable Timba Salsa performances.

RSVP to the event on Facebook here for more updates.

Also, next Saturday January 31, Son de Rey is returning to 6th street for another show at El Sol Y La Luna. This show is open to all ages.

*** Have you cast your vote yet for your favorite bands in the Austin Chronicle Music Poll? Vote for Son de Rey “Best Latin Band” here to show your support. ***